The interiors of continents (so-called ‘intraplate regions’) are subject to recurrent seismic activity and infrequent but large and potentially damaging earthquakes1 . It is now recognized that a primary cause of intraplate seismicity is the tectonic reactivation of preexisting faults and other weaknesses in the Precambrian basement. When favorably oriented, these weaknesses can be reactivated by ‘far-field’ stresses transmitted from 1 Zoback and Zoback, (1981) 2 distant plate margins2 . In North America, concern for the design and safe operation of strategic facilities, such as nuclear generating stations, has prompted efforts to re-evaluate seismic hazards in many areas that were formerly regarded as areas of low risk. A primary requirement for these assessments is a detailed understanding of the structural characteristics of the Precambrian basement, in particular, the distribution and geometry of fault and fracture zones.

In southern Ontario, Canada, recent attention has been focused on evaluating the seismic hazard potential of deeply seated Precambrian basement faults3,4,5,6 . Tectonic reactivation of Precambrian structures has been linked to recurrent seismic activity and the presence of ‘basement-propagated’ faulting in overlying Paleozoic and Quaternary sediments6,7 . These interpretations remain controversial however, because it is difficult to demonstrate that near-surface faults are continuous with Precambrian structures at depth. In southern Ontario, the basement is deeply buried by Paleozoic strata (up to 1500 m) and younger sediments and the distribution of faults can only be inferred from deep seismic studies and aeromagnetic data. The existing aeromagnetic data coverage for the province (Fig. 1) however, is insufficiently detailed (nominal 800-1000 m flight lines) for mapping basement structures at a scale that would allow comparison of near-surface features with basement fault zones.

The present study is applying high-resolution magnetic and seismic surveys to lake basins in southern Ontario in an attempt to better resolve possible basement structural controls on near-surface faults. Current work is focused in western Lake Ontario and Lake Simcoe (Fig. 1A), where previous work has identified faulting in lake bottom sediments8 . Lake basins are favorable locations for study of basement fault reactivation because they contain thick, relatively complete sequences of postglacial and Holocene lacustrine sediments that are susceptible to co-seismic faulting. 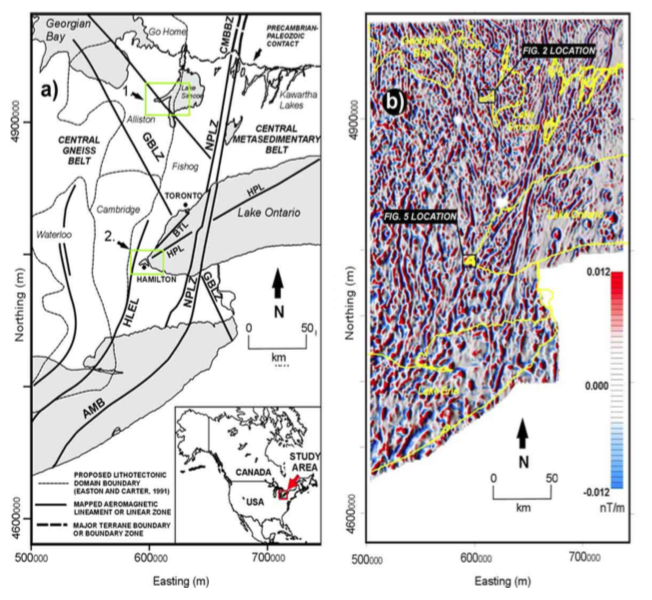 Geophysical studies in Lake Simcoe are aimed at better resolving basement structures and the origin of lake bottom faulting in Kempenfelt Bay (Fig. 1). Kempenfelt Bay is deep (> 40 m), west-east trending embayment on the western shore of Lake Simcoe (Fig. 2A). The embayment contains a thick (> 70 m) infill sequence of laminated postglacial muds and thin (< 10 m) Holocene lacustrine sediments. Previous work8 here has identified the presence of anomalous ‘graben-like’ normal faults on the lake bottom. The embayment overlies a broad basement shear zone that marks the boundary between the Alliston and Go Home Precambrian terranes (Fig. 1B). A primary objective is to determine whether lake bottom deformation is neotectonic in origin (i.e. related to basement reactivation), or the result of other processes (e.g. ice collapse, differential compaction of sediments over bedrock).

Work in western Lake Ontario (Fig. 1A) is investigating possible basement structural controls on Paleozoic bedrock faults that underlie the buried Dundas Valley. The Dundas Valley is a west-east re-entrant valley that penetrates the Niagara Escarpment at the western end of Lake Ontario. The valley is aligned with a northeastsouthwest trending Paleozoic fault (Hamilton Presqu’ile fault) that has been mapped in Prince Edward County11 and western Lake Ontario. The fault has magnetic expression and is suspected to originate in the Precambrian basement. Geophysical investigations are being conducted in Hamilton Harbor (Fig. 2B), a shallow embayment at the western end of Lake Ontario, with the objective of delimiting the fault and its possible relation to bedrock faulting and recurrent seismicity within the Dundas Valley.

More than 2000 line km of lake-based, high-resolution magnetic data and subbottom sonar profiles have been acquired in Kempenfelt Bay and Hamilton Harbor (Fig. 2). Lake-based magnetics were collected using an Overhauser magnetometer deployed from 22’ survey launch. The magnetometer cycles at a rate of up to 4 Hz, providing an inline sample interval of about 1 m at typical survey speeds of 10 km/h. A primary advantage of lake-based acquisition, is that surveys can be acquired at considerably smaller survey line spacings (typically 5-50 m versus 400-800 m for airborne data) with the sensor towed at a constant elevation above the lake bottom. The smaller line spacing enhances the content of short wavelengths in the magnetic data leading to significant improvement in the spatial resolution of the surveys.

Seismoacoustic profiles were acquired with a sub-bottom sonar profiling system that employs a swept 5-15KHz chirp impulse. The profiler provides a maximum penetration in lake bottom muds and silts of about 50 m and decimeter-scale resolution of sub-bottom layering. Penetration in ‘hard’ bottom conditions (i.e. sands, gravels, bedrock) is generally limited to < 5 m. Side-scan sonar data were also acquired using a dual-channel 300 KHz towfish. Survey positioning for all lake-based work was provided by an onboard D-GPS and chart-plotting system that provided 2-3 m positioning accuracy.

Figure 3 shows the preliminary results of a lake-based magnetic survey of Kempenfelt Bay. Magnetic mapping identifies a number of west-east trending curvilinear anomalies and a broad zone (ca. 3 km in width) of high amplitude northwest-trending magnetic anomalies that crosses the middle section of the bay. The high-amplitude anomalies mark the boundaries of Alliston-Go Home basement shear zone. The high magnetic intensity of the boundary reflects the presence of mylonitic rocks within the shear zone that have much higher susceptibility than the adjacent basement gneisses. The magnetic image also shows clearly that the shear zone is offset by a west-east magnetic lineament. The lineament is interpreted as the trace of a strike-slip basement fault that offsets the boundary with a left-lateral displacement of about 500 m (Fig. 3).

Side-scan sonar imaging shows that the southeastern boundary of the faulted shear is associated with slumping of postglacial sediments on the adjacent basin slope (Fig. 4). The discordant outcrop patterns imaged on the slope indicate the presence of several large, rotated slump blocks. The slump blocks appear to be part of a larger, lobate mass flow deposit that extends onto the basin floor. The debris flow lobe can be seen in the digital bathymetry data (Fig. 3B) as a protrusion of the bathymetry contours at the southeastern edge of the shear zone (Fig. 3B). Large-scale slump features were not identified elsewhere along the basin margins. The features are interpreted as evidence for geologically recent (Holocene?) slumping and possible neotectonic reactivation of underlying basement structures. 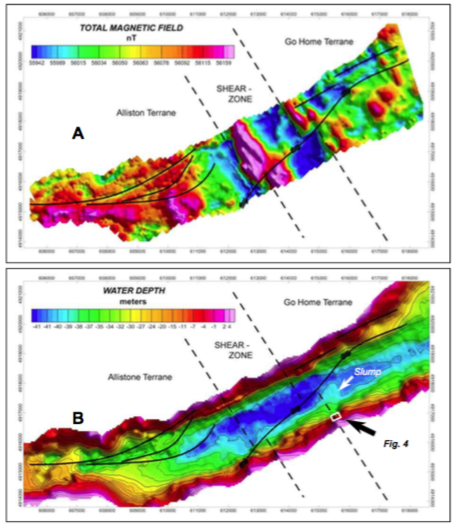 Other interesting features imaged in sub-bottom profiles include gas escape structures that appear as characteristic convex-upward ‘bee-hive’ reflection patterns (Fig. 6). The structures are associated with localized depressions and linear troughs in the lake floor that are produced by erosion of sediments by the escaping gas. The linearity of the trough features suggests that gases and pore waters are likely moving vertically along discrete fracture or fault planes in the lake bottom sediments. 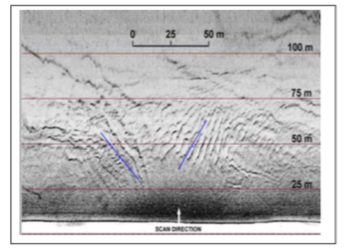 Figure 4: Side-scan sonar image of southern basin margin of Kempenfelt Bay, showing large rotated slump block (location of image shown in Fig. 3B). The slump block is part of a larger mass flow deposit (‘lobe’ Fig. 3B) located on the southeastern margin of the Alliston-Go Home shear zone. Slumping is interpreted as a co-seismic feature associated with basement fault reactivation. 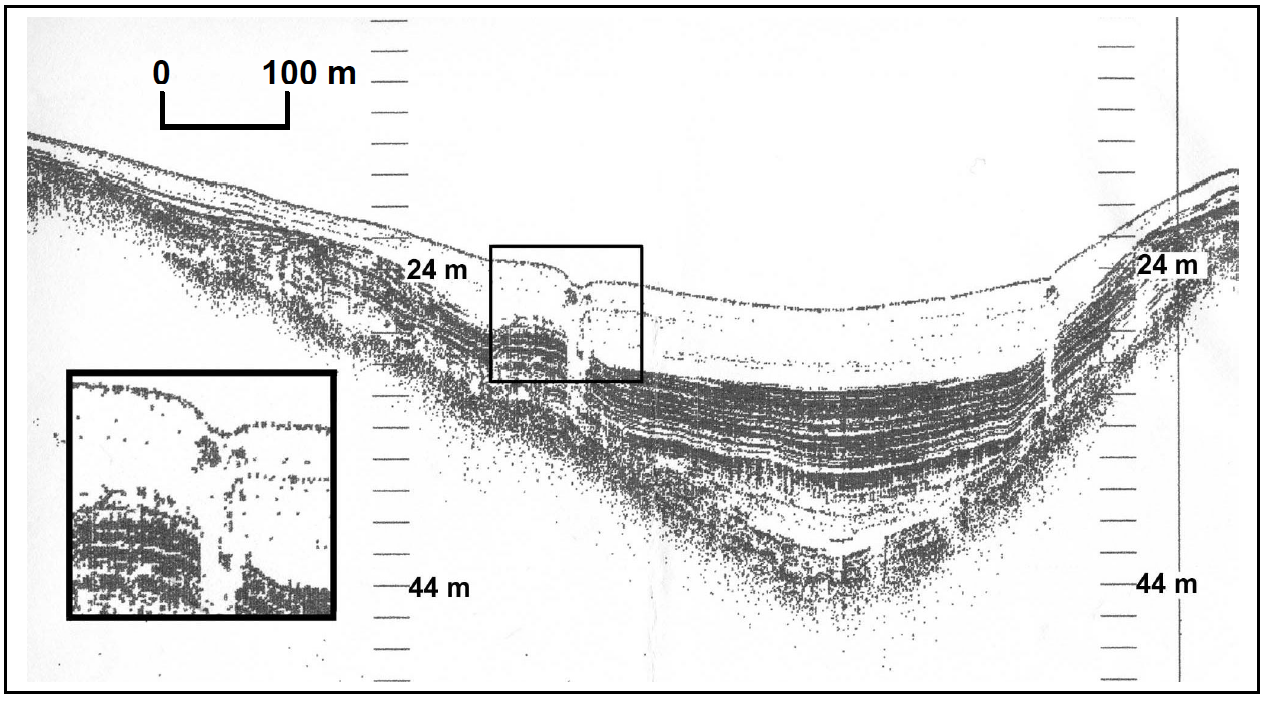 The results of high-resolution, lake-based magnetic surveying of Hamilton Harbor are shown in Figure 8. The survey was acquired with a nominal line spacing of 75 m in order to enhance imaging of short wavelengths associated with shallow source bodies. The residual field map (Fig. 8) was generated by an upward continuation of the total field data to 100 m and separation of the regional by grid subtraction. The image clearly shows a prominent (ca. 50 nT) linear magnetic boundary that parallels the basin axis. Preliminary modeling of the source body depth suggests that the lineament is associated with a relatively shallow source (< 300 m), and most likely reflects thickening of Quaternary sediments (outwash) within a deep bedrock channel at the axis of the buried Dundas Valley (Figs. 9, 10). The sharp linearity of the boundary may indicate the presence of a steep-sided bedrock channel, bounded by erosional bedrock escarpments or fault-controlled scarps.

Faulting is the favored interpretation for the magnetic boundary and is consistent with recent shallow seismic studies12,13 conducted at the western end of the Dundas Valley, 15 km to the west of Hamilton Harbor (Fig. 9). Seismic data show that the margins of the buried valley are offset by a series west-east trending normal faults that displace the Paleozoic bedrock surface with vertical offsets of up to 50 m. 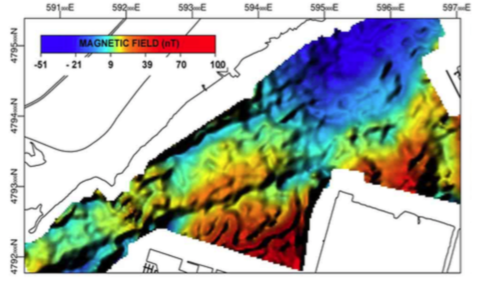 The relation between bedrock faulting in the Dundas Valley and the magnetic boundary imaged in the harbor is the subject of continuing investigations. The strike of the bedrock faults (dominantly 040-050) imaged in seismic data (Fig. 9.) is generally consistent with the trend of the magnetic lineaments and strongly suggests structural affinities between the structures. Ongoing work will involve imaging of the bedrock surface and infill stratigraphy below the harbor using multi-channel seismic profiling.

Other lines of evidence suggest that bedrock faults in the buried valley have been reactivated in the geologically recent past, and have exerted structural controls on the development of the modern landscape. Figure 10 shows a digital elevation model (DEM) constructed for the Dundas Valley (Fig. 10) by gridding of digital contour information. The image reveals a striking similarity between the orientation of a west-east trending stream channel (Spring Creek) and the trends of magnetic lineaments mapped in Hamilton Harbor. The linearity of the flood plain and its alignment with the magnetic boundary strongly suggest bedrock structural control. A likely interpretation is that the stream channel pattern is controlled by propagated bedrock fractures or displacements on normal faults on the valley floor. 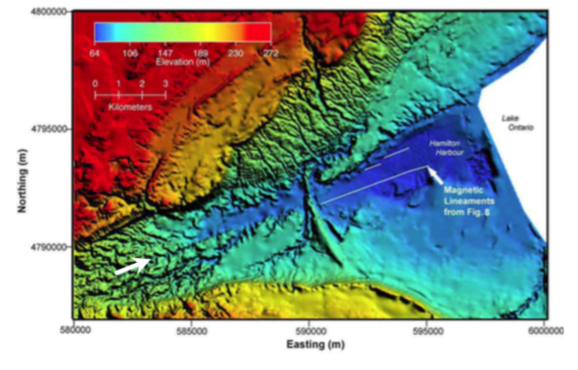 This paper has demonstrated the application of high-resolution lake-based magnetics and acoustic imaging to the study of faulting in lake basins in southern Ontario. The approach has provided important new insights into the structural characteristics of the Precambrian basement and possible linkages between basement structures and near-surface deformation.

Funding for this project provided by Natural Science and Engineering Research Council (NSERC) of Canada grant to Boyce. Thanks to Roger Edgecombe for access to unpublished land seismic data and Doug Hrvoic and Melissa Marlowe of Marine Magnetics for technical assistance and support. The research facilitated by academic software grants from Landmark Ltd. and ERMapper.

2. Talwani, P. and Rajendran, K., 1991. Some seismological and geometric features of intraplate earthquakes. Tectonophysics, 186, 19-41. 3. Wallach, J.L., 1990. Newly discovered geological features and their potential impact on Darlington and Pickering. Atomic Energy Control Board of Canada, Report, INFO-0342. 4. Wallach, J.L. and Mohajer, A.A., 1990. Integrated geoscientific data relevant to assessing seismic hazard in the vicinity of the Darlington and Pickering nuclear power plants. In: Prediction and performance in

3. Wallach, J.L., 1990. Newly discovered geological features and their potential impact on Darlington and Pickering. Atomic Energy Control Board of Canada, Report, INFO-0342. 4. Wallach, J.L. and Mohajer, A.A., 1990. Integrated geoscientific data relevant to assessing seismic hazard in the vicinity of the Darlington and Pickering nuclear power plants. In: Prediction and performance in