Unexploded ordnance (UXO), improperly deployed (or dumped) in the world’s oceans and lakes for the past 70-plus years, are becoming a critical concern for the safety of people and the long-term health of subsea habitats and fish stocks. Risks to humans can result from munitions washing up on beaches, or fishermen inadvertently capturing devices in their nets or trawls, and eventually from chemicals undetectably leaching into the environment as the steel casings on older munitions deteriorate. Any of these possibilities could eventually result in devastating human contact or environmental damage.

While there has not been much of an appetite by governments to fund largescale clean-ups, technology demonstrations and limited real-world ‘remediation’ projects have been funded with an aim towards developing equipment and methodologies to identify, localise and neutralise the unexploded munitions. Remotely operated vehicles and autonomous underwater vehicles are two modern tools being used to assess seafloor debris, remove items of interest and perform long-term monitoring of these potentially dangerous sites.

Today’s AUVs provide a common-sense approach to this global issue with a growing list of detection and localisation capabilities, including high-resolution sonar (sidescan/interferometric bathy), camera systems, a variety of environmental sensors and, most recently, small total-field magnetometers that can be towed through the survey area. Using an AUV platform, all sensor data can be collected and logged simultaneously, accurately geo-positioned and time-stamped and catalogued for postmission analysis or long-term research and monitoring – all done while keeping people out of direct contact with the potential hazards of UXO.

One affordable and capable small AUV for near coastal work is the Iver AUV manufactured by OceanServer Technology in Massachusetts. When coupled with a small towed magnetometer, the Explorer by Marine Magnetics of Ontario, Canada, it provides an easily-deployable tool for detecting ferrous objects such as UXO, even if they have been covered over by sediment or marine growth and are therefore not easy to identify using traditional imaging sensors such as cameras or sonar exclusively.

OceanServer and Marine Magnetics started collaborating in 2011 with a magnetic characterisation of the Iver2 system. Integration of magnetometers with AUV platforms has historically been a difficult problem because of the strong magnetic fields created by the autonomous underwater vehicle’s batteries, power subsystem components, electromagnetic motors and servos/actuators. Additionally, the power consumption of a towed magnetometer and the induced hydrodynamic drag of any towed device were detrimental to the AUV’s mission duration, stability and navigational accuracy.

The Explorer’s use of Overhauser technology to provide high-sensitivity in noisy environments, and its power draw of less than two watts in a very small neutrally-buoyant housing, made it possible to integrate the system with this small AUV. Some hardware and software modifications needed to be made on both the magnetometer side and AUV side, but the low inherent magnetism of the Iver2 allowed the modifications to be kept simple, and eventual field testing validated that it was possible to tow the magnetometer only a short distance (two metres) behind the AUV without affecting the fidelity of the Explorer magnetometer.

The AUV-towed mag system is a significant step forward, allowing users to get a consistent data set on close horizontal survey line spacing and at a fixed distance from the seafloor, both significant challenges when towing anything from a surface vessel, especially in rough weather and when searching for small targets like UXO.

By the second half of 2012, OceanServer formally launched the product, and in the past few years the Iver 2 and Iver 3 AUVs, equipped with towed Explorer magnetometers, have completed dozens of surveys. The magnetometer data has exceeded all expectations. The Iver’s great control of position, depth and altitude, coupled with Explorer’s accurate and highsensitivity sensor, produced total-field data of such high quality that it is comparable to larger boat-towed gradiometer data. Below are some survey results from recent field projects. 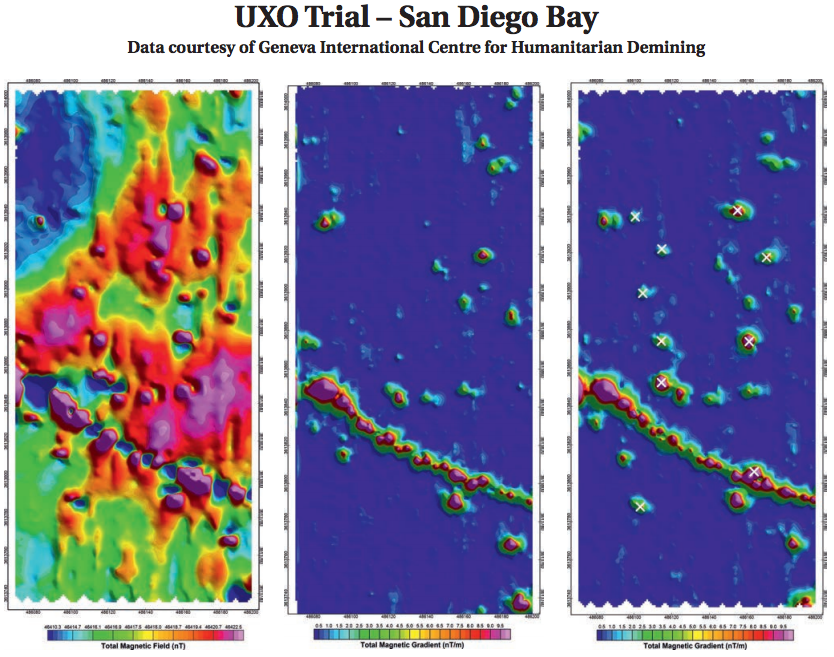 In the summer of 2014, the Iver2-Explorer integration was tested at a UXO trial for the Geneva International Centre for Humanitarian Demining, Switzerland, in San Diego Bay, USA. Two 250-metre x 120- metre surveys were conducted over the same area. One before seeding with simulated UXO targets, and the second after seeding. The smallest target was onekilogram of steel and sizes ranged from 60 millimetres to 160 millimetres.

The total-field map (figure 1) shows significant geological background obscuring small near-surface targets and a small pipeline in the lower half of the block. Twenty-six near-surface targets were detected before seeding. Post-processing of the collected mag data confirmed that all ten UXO were reliably detected after seeding.

In the autumn of 2014, OceanServer delivered an AUV to the Institute of Oceanology of the Polish Academy of Sciences in Sopot, Poland. The AUV was equipped with high-resolution sidescan sonar, a towed Explorer magnetometer and a full suite of environmental sensors utilising a YSI, USA, 6600 sonde mounted in the AUV bow. The AUV purchase and subsequent research was funded by the MODUM project supported under the NATO Science for Peace and Security (SPS) programme. The stated purpose of MODUM is to move “towards the monitoring of dumped munitions threats in the Baltic Sea”. Some of the key goals of the project were to establish a costeffective, research-based monitoring network using underwater vehicles to enhance the understanding of dumped munitions in the Baltic Sea, which pose both environmental and human security threats. This combination of sensors enables the AUV to identify likely munitions and take geo-registered environmental readings in close proximity to the targets. The status of the munitions in the Baltic Sea area are of particular concern given the high ship traffic, impact on fish/fishing and the ongoing development of offshore energy – for instance, wind farms. 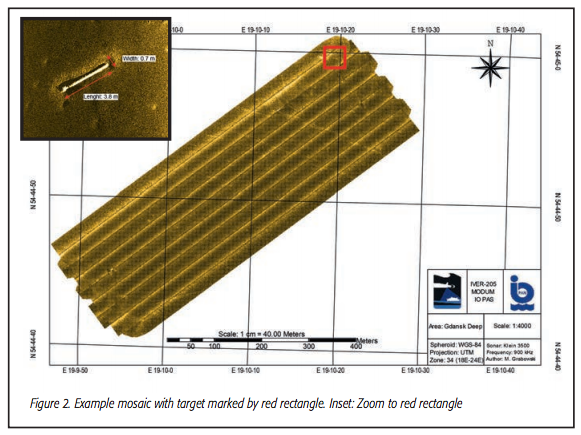 A series of missions, as recently as September 2015, were deployed in the area of the Gdansk Deep (Southern Baltic Sea) by a team of researchers from the Institute of Oceanology of the Polish Academy of Sciences. Available sonar frequencies from the Klein, USA, 3500 include 455kHz and 900kHz, however, during missions in the Gdansk Deep only the higher frequency was used to obtain photo-like images. The AUV performed 12 missions in the area of interest and 67 targets were detected (figure 2). The AUV was also equipped with a Marine Magnetics Explorer towed magnetometer to detect magnetic anomalies during the survey, which could be used in conjunction with simultaneously collected sonar data to plan subsequent surveys. After every mission, data analysis was performed to localise targets. Magnetometer data was correlated with sonar data, which aided in planning ROV missions (figure 3). In addition, after every mission performed by the Iver AUV highresolution sonar mosaics were prepared. 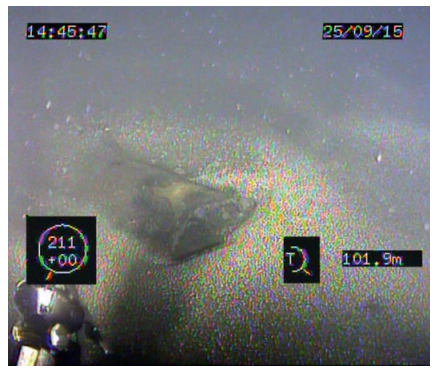 OceanServer expects that small AUVs, coupled with improved sensors, navigation methods and survey techniques, will increasingly be deployed to address the global issue of detecting and monitoring dumped UXO.

The author would like to acknowledge the contribution of the following participants to the content of this article: