Neither Explorer nor the Iver2 require a large vessel, or a lot of deck space.

AUVs are powerful platforms for marine survey, wielding an arsenal of sensors and giving the ability to get closer to investigated targets reliably, consistently and inexpensively.

Magnetometers have always been a particular challenge to mount on AUVs because of their strong magnetic signatures.

AUVs must use electric motors for all their actuators, and these in turn create strong magnetic fields when they operate, interfering with the magnetometer sensor.

To solve the problem, an AUV was needed whose magnetism was mild at best, and a magnetometer was needed that was small, and low-powered. Iver2 is a handdeployable vehicle designed for quick deployment in inshore (<100m water depth) conditions.

The total-field magnetic dataset acquired by the Iver2-Explorer, showing the survey track, which is extremely straight and precise. If AUV-induced error were present, one would expect to see ‘striping’ along the direction of the survey lines. Instead, the background field is very smooth and gradual, showcasing the accuracy of the data. The two linear anomalies are charted steel pipelines. 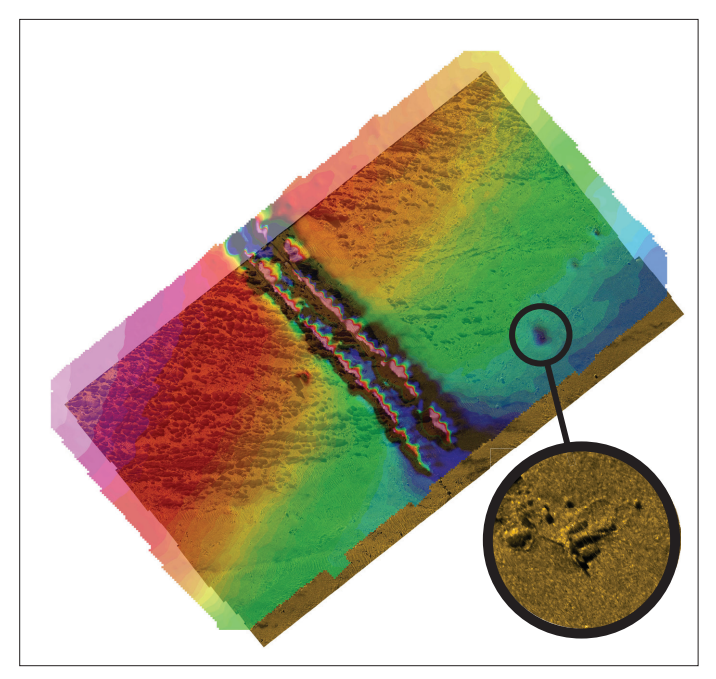 Iver2 was designed with the capability to tow a small payload, allowing the Explorer sensor to be kept outside the AUV housing.

Still, the amount of tow cable was practically limited to a small distance.

After intensive lab testing and engineering at OceanServer’s and Marine Magnetics’ facilities, the next step was a true field test: an actual survey over a site with known magnetic anomalies, and a smooth regional background ambient magnetic field.

The test site was on Lake Ontario, and it was conducted close to the end of the 2012 season, when weather conditions were rarely calm and nice.

Most of the survey was conducted at night, and in stormy conditions. Waves increased from 1m to 2m over the course of the project. Rain and thunderstorms began around the midpoint.

Iver2 can be programmed to track the sea floor, or to survey at a fixed depth. Since the bathymetry of the area was not well known, and sharp inclines may have existed, Iver2 was programmed for a constant water depth of 3m. Survey speed was set to 2.5kts, which is nominal for the AUV.

Slower speeds save power, and increase endurance. A side benefit of slower speed is higher spatial resolution for the magnetic data. Explorer was set to sample at 2Hz.

Line spacing was set to 10m—a distance that would be a challenge to maintain reliably for a human boat operator, even in calm conditions, but Iver2 maintained it perfectly in a storm.

A huge benefit of the system is that the Iver2 can maintain very tight line spacings, producing data with very high spatial resolution. 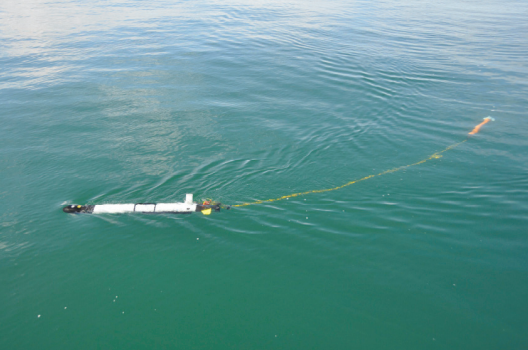 The entire survey required six hours to complete, totaling a little over 18 line-km. The magnetometer data was downloaded wirelessly directly from the Iver2, and processed. Two corrections were applied: the magnetometer coordinates were adjusted for the 5m tow cable length, and correction for diurnal variation was applied using data from the Ottawa magnetic observatory. The smoothness of the regional background field shows the extremely low error level in the data. Had there been

Two corrections were applied: the magnetometer coordinates were adjusted for the 5m tow cable length, and correction for diurnal variation was applied using data from the Ottawa magnetic observatory. The smoothness of the regional background field shows the extremely low error level in the data. Had there been

The smoothness of the regional background field shows the extremely low error level in the data. Had there been

Had there been AUV-induced error, horizontal striping would be visible in the background field—no such striping is present.

The strong pipeline anomalies in the center of the block are positioned accurately exactly where expected and shown on marine charts. Small point-source anomalies are visible throughout the block.

The Iver2 also carried a Klein 3900 500kHz side scan sonar, which operated continuously during the survey. Collecting both side scan and magnetometer datasets with a single platform is a major benefit.

The side scan mosaic is shown above, superimposed on the magnetic field plot. The two data forms provide complimentary information on detected targets. Some magnetic anomalies do not appear on the side scan mosaic, indicating they are buried. Others are clearly shown, such as the small anchor in the callout.

Precise positioning, high resolution coverage, excellent data quality, the ability to survey in harsh conditions, and with low operating costs make it an attractive tool for a magnetic surveyor’s toolkit.

Explorer is available now in an Iver2-compatible configuration from Marine Magnetics. It simply plugs into any suitably equipped Iver2 vehicle, and is ready to survey.

The side scan sonar dataset was processed and mosaicked with Hypack. Thank you to Hypack for very generously providing Marine Magnetics with the software.